JAXPORT’s ongoing investment in building the port of the future was on display today as three state-of-the-art 100-gauge electric container cranes cruised in on the St. Johns River. The cranes arrived at the Blount Island Marine Terminal aboard the specialty vessel Zhen Hua 14, which departed from Shanghai, China in early June. They will be offloaded at the newly reconstructed Berth 35 and will be fully-operational by the end of the year.

The new container cranes are equipped to service wider, post-Panamax vessels with the ability to reach across 22 containers, a significant increase from the 16 container capabilities of the terminal’s current cranes. Each electric crane will work on regenerative power, consuming power during the lifting of containers and creating energy as they lower. The use of electricity will increase energy efficiencies and reduce emissions.

“Our strategic investments are focused on building a competitive port, accelerating cargo growth, and creating jobs and economic opportunity for Northeast Florida,” said JAXPORT CEO Brian Taylor. “The addition of these cranes is a critical step toward supporting the ever-larger ships calling on the port through the Suez Canal as well as the newly expanded Panama Canal.”

JAXPORT’s long-term strategic plan calls for the purchase of a total of ten 100-gauge cranes for Blount Island in the next 10 years.

In 2014, JAXPORT awarded a $37.6 million contract to Shanghai Zhenhua Heavy Industries, Co. Ltd. (ZPMC), for the manufacturing, delivery and installation of the cranes. Shaw GVB, a subsidiary of Chicago Bridge and Infrastructure, provided engineering services before and during construction.

The Florida Department of Transportation awarded JAXPORT a $15 million grant toward the purchase. 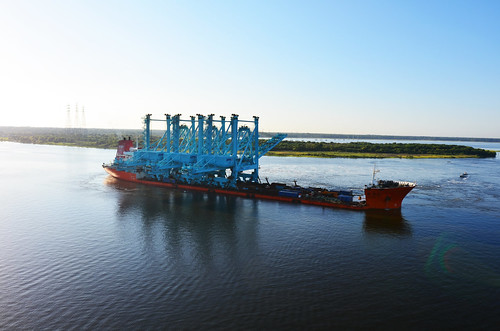