On Aug. 29, 2015, TOTE and NASSCO launched Perla del Caribe, the second of two Marlin Class ships built at the NASSCO shipyard in San Diego. These first containerships in the world to be powered by natural gas will be homeported at JAXPORT.

The Perla del Caribe and her sister ship, christened Isla Bella, were purpose-built for the Puerto Rican trade for TOTE Shipholdings and will be operated by TOTE subsidiary Sea Star Line out of Jacksonville, Florida. By moving to natural gas, an environmentally superior fuel, the Marlins will reduce NOx emissions by 98 percent, SOx by 97 percent, carbon dioxide by 72 and particulate matter by 60 percent over the Ponce Class ships – the company’s vessels currently serving the trade.

Tim Nolan, President of Sea Star Line, noted “The ability to innovate and lead in the maritime sector is something that comes along once in a lifetime…These ships and the technology they employ will redefine what is possible in the shipping industry both here in the United States and abroad.”

Emma Engle, the daughter of Tim Engle and third generation of Saltchuk ownership, is the ship’s sponsor and had the honor of christening and launching the vessel. 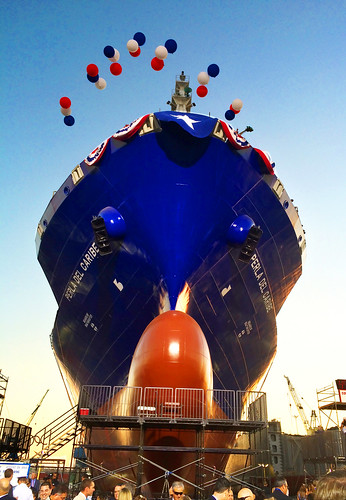