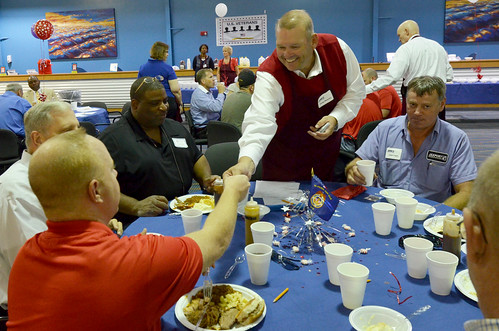 JAXPORT today held a special luncheon honoring JAXPORT employees who have served in the U.S. Military along with residents of the Five Star Veterans Center in Jacksonville. During the luncheon, served by members of JAXPORT’s executive staff, veterans from Five Star had the chance to meet with JAXPORT’s veteran employees to discuss the challenges and opportunities of transitioning from military to civilian life.

Currently, 59 of JAXPORT’s 155 employees are veterans representing all five branches of the military. The veterans have a total of more than 600 years of military service.

“Anything we can do for our veterans to recognize their sacrifice is valuable to us, both as a community and as an organization,” said JAXPORT Board of Directors Chair Dr. John Newman. “Hopefully today sends a small, but nonetheless important message, that ‘you are not forgotten.’”

“It’s nice to see organizations like JAXPORT helping out veterans,” said William Nixon, a Five Star resident and a U.S. Army Veteran. “It makes me feel proud. It makes me appreciate the job that I did, and the job that all the other veterans have done, to serve our country.”

Find out more about the Five Star Veterans Center.

Watch a video showing how a van donated by JAXPORT is improving the lives of veterans living at Five Star.